1. Your webpage describes you as a stand-up poet. How do comedy and poetry interact in your work? When you’re writing, which do you think about first?

I think good stand-ups and good poets have a dovetailing goal, which is to say the most interesting thing in the smallest number of words. A decent gag can always be made better by cutting the number of words it takes to get to the punch. You also have to think about syntax – the ‘plot’ of a sentence, what gets disclosed where. I mean, look at some Emo Philips or Mitch Hedberg jokes. Obviously they’re sold by a strong character delivering them, but they’re beautifully constructed pieces, too.

On the other hand, oftentimes you have to unpack a joke slightly for the audience to get it, or you can tag it and riff on a theme. That’s the same as developing a poetic conceit.Basically, there’s loads of overlap. Stand-ups and performance poets both live or die on their skill with language. For me, it’s not easy to say where one begins and one ends and say ‘oh this bit is poetry, and this bit is just comedy’, but I guess I usually start off thinking about the poetry first – the premise of a piece, the narrative behind it – then I hunt for the funny bits as I go. But sometimes, a story or poem isn’t funny, it’s interesting, or sad. The best are all three, obviously. Also, if a poem isn’t particularly funny, I’ll often think about my lead-in to it. I spend more time on stage talking around the poems than I do performing the actual pieces, so all that stuff is really important to me too – and that’s often where I’ll try to crowbar in a few more laughs.<

2. What are you working on at the moment? Does it involve poetry? If not, why not?

Two projects – one is a novel, and no, it doesn’t involve poetry, which is why it’s a total ball-ache to work on. Prose is hellish and neverending and then you have to find someone who’s prepared to invest in you before you can make actual money out of it. It’s a story about a girl who likes shooting things and then suddenly gets the opportunity to shoot a lot of things. It’s not poetry because I’m a masochistic idiot.

The other is my first poetry collection, which does contain poetry, obvs. It’s as yet untitled – ‘Pub Stuntman’ is one possible title. It’s the best work I’ve produced so far – it looks like there’ll be a book and a CD with performances, because really some stuff was written to be heard and so that seemed like the most sensible way of delivering it.

3. Your Poetry Takeaway project brings poetry to the masses in the best kind of way. How did this idea come about, and how on earth did you get it off the ground?

The idea came about as a solution to a problem – necessity being the mother of invention and all that. I wanted to get poets performing on the Royal Mile at the Edinburgh Fringe, but they only have a few crappy stages, without amps, and they’re controlled by the Fringe Society. I wanted a more sustained presence, to flier people and engage them, but there was no scope for that. If you wanted to sell stuff, you needed to pay for a trader’s licence. But then I saw this little footnote at the bottom of all their regs which made provision for ‘small, mobile stalls’ for people doing free facepainting and stuff like that. So I kind of adapted the format of the street caricaturist for poetry, you know, you sit down, ‘so what do you like, football? Dancing?’ then they knock out this hacky pic of your face with you kicking a ball. I set up a camping table with a homemade sign in front of it, and punters came.

After Edinburgh, I worked with Tom Searle of Show + Tell. We got some funding from IdeasTap and some crowdfunding from a bunch of really generous friends and strangers, bought a takeaway van off eBay then had it refurbed as a mobile poetry emporium. It now travels the country offering free, bespoke poems in around 10 minutes. I’ve written hundreds of poems for people. It’s a massive money sink, a hassle, and one of my favourite things I’ve ever done. I love speaking to new people. They’re so friendly and interesting and great. I’ve heard so many amazing stories.

4. Which do you feel more comfortable with: poetry in performance or poetry on the page?

In performance. You’ve got a tighter relationship with your audience which hopefully forces you to produce a higher standard of work. Poetry on the page suffers from an asymmetry between consumers and producers. Everyone’s writing it, a vanishingly small percentage simply read it. Too many page poets ensconce their work within this bulwark of recondite justifications and glib relativism, disenfranchising the reader in an attempt to shield themselves from criticism. I find I can’t get away with that on the stage – not if I want to reach a wide enough audience to make a living out of it, anyway.

Actually, on reflection that’s not very fair. There are plenty of people performing rather cheap, manipulative chunks of juvenile agitprop or manipulative, superficial identity politics pieces and finding an audience in the performance poetry scene, especially within slam. It’s neither easier nor harder to be a pretentious idiot on stage than it is on the page. I guess…I suppose I just personally find it harder to get away with cheapness on stage than I do on the page, because I have to look actual people in their actual eyes. But there are plenty of narcissistic sociopaths out there who can do that with aplomb.

5. What are you reading/hearing/experiencing that’s influencing your poems right now?

There tends to be quite a long time lag between my reading something or seeing something and it actually turning up in a poem. If I’m honest, I’ve been listening to loads of golden age hip-hop in the last few years, and that’s been reflected in my increasingly less ironic and more earnest rap ‘parodies’.

It takes less time than prose. You can have an idea, rattle it out in a night’s feverish key-tapping, then try it out on stage the following evening. That’s the entire artistic circuit complete. Prose, by comparison, involves years of your life and the consent and cooperation of a whole chain of people before it reaches its finished state. And even then, it might be crap. If a poem’s crap, you find out early and you ditch it, and you’ve lost, what? A couple of days at most.

7. Last November, you wrote 101 Poems In A Day. How do you feel about them now? Do you ever look at NaPoWriMo and think, ‘that’s cute’?

Some I quite like – they feel like mini comic strips. It certainly makes me write in a different voice than usual. The endings are usually the biggest casualties – there’s a sense of me abandoning each piece rather than concluding it. Certainly I really like the sense of fun in the pieces – perhaps the kindest thing you can say about them is I’m clearly not overly preoccupied with building a reputation as a literary genius.I did the project the two years before that, so that’s 302 in 3 days. NoPoWriMo poets are total babies. People say ‘quality not quantity’, but you can brute force quality by producing a huge body of work then returning to it and culling the bad stuff. I’d say, in my 101 poems, I get about a 3% hit rate – i.e. poems that, with editing, could be worth keeping. That’s still 3-4 new poems in a single day. So I guess my message is: poets – write more bad poetry! 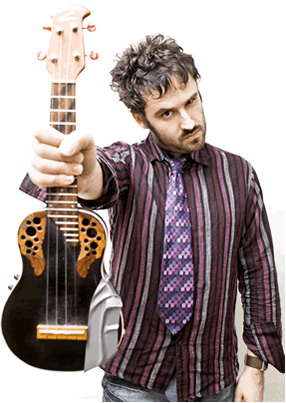 Tim Clare is a poet, author and musician. He was born in 1981, and grew up in Portishead, in South-West England.

In 2005 he presented the Channel 4 series How To Get A Book Deal. His first book, WE CAN’T ALL BE ASTRONAUTS, a memoir about jealousy and having one last shot at achieving your dreams, won Best Biography/Memoir at the East Anglian Book Awards. He has appeared on BBC 2, Radio 1, 2, 4 and 6, and has written for The Guardian, The Times, The Independent, The Big Issue and Writing magazine, amongst others.

As a stand-up poet, he performs all over the UK, both as a solo act and as a member of acclaimed poetry collective Aisle16. He has shared a stage with the likes of Vic Reeves, John Cooper Clarke and Tim Key. His debut solo show, Death Drive, appeared at the Edinburgh Fringe in 2010, where Whats On Stage gave it 5 stars. His follow-up show, How To Be A Leader, appeared at the Edinburgh Fringe in 2011 and won a Brighton Fringe Best Show award.

Tim Clare is the creator of the Poetry Takeaway, the world’s first mobile poetry emporium. For the last 3 years, he has also undertaken his 101 Poems In A Day project, writing 101 poems in a day and posting each online as he writes it, based on title suggestions from the public.