Ask A Twitter Poet, Volume 2: What topic (not abstract, but concrete) shows up most in your poems?

Welcome to the second edition of Ask a Twitter Poet.  This week I was thinking about how often water comes up in my writing.  Maybe because I’m from New England, grew up on the coast, and then lived in New York city before moving to Texas where, well, we’re basically landlocked.  I dream a lot about water, too — last night I had version #34695467y of the recurring dream where my bathroom is flooding.  And so often dreams like this get incorporated into my work.

So I thought I’d ask what other folks find as recurring topics in their work.  Not abstractions like love or politics or the meaning of life, but straight up, concrete images: birds, sand, trees, breakfast cereal. Below are some of the answers I got on The Twitterz:

END_OF_DOCUMENT_TOKEN_TO_BE_REPLACED

A Bull In The Garden: Elena Evangelo on Poetic Process

If your life is burning, well then poetry is just the ash.
–Leonard Cohen

I wrote my first poem when I was 4.  I would like to say it was mensa material, but frankly, it was terrible.  What I still marvel at is that I was always drawn to this form of expression.  I didn’t know what a poem meant but I loved it purely.  The value of words, their weight, their counterweight.  The vowels, the bones, the muscles.  Weeding through the fat.  Now, I recalibrate daily to stay as much as possible in that original love.  To resist wanting to control the words.  It’s a fight to not domesticate the poem.

Process.  Every time.  Walking into each poem, the moment can turn out to be as small as a second and as big as a bull ring.  For me, it always feels like a blood sport.  Primal but epic.  Personal yet external.  Once I exhaust myself, I can slide into surrender.  Finally, I can give in to the release that builds when you let the poem rise up.  Sometimes it hunts me.  Sometimes it wades.  Sometimes it’s a whisper that I have to grab the tail of and wrestle down.  I like the surprise and letting the alchemy take over.

And then of course, there is the poem that resists me.  For months, I keep catching glimpses.  I know it’s there.  It’ll make eyes at me and poof, it’s gone.  Occasionally, it will come back.  And when it does, I have to be ready for it.  I have to be a snake charmer, very still and seductive, to trap it while it’s doing its dizzy dance.

After that, comes surgery.  Not always but often.  The pruning but not over pruning.  I mustn’t carve out its heartbeat.  That has to stay wild, untamed.  The poem must maintain its ineffable urge that brought it from a thought spark to paper.

And finally, comes the selfishness.  Poetry is my high.  I’m an addict.  Greedy for words.  And even more greedy to be unlocked.  To feel like I’m sitting in the lap of life. In sync.  With secrets dropping from the sky.   I want to burn up life.   And poetry is just the ash.

You see, I want a lot.
Maybe I want it all:
the dakrness of each endless fall,
the shimmering light if each ascent. 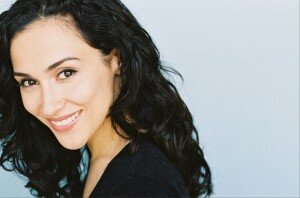 She graduated from Vassar College with her B.A. in English and French. Afterwards, she received her M.F.A. from the USC, School of Cinematic Arts, graduating Phi Kappa Phi. There, she was also awarded The Jeffrey Jones Screenwriting Scholarship and The Ray Stark/ Ted Turner MGM Award. Elena also went on to Paris to study French Theater through NYU.

Elena has appeared in the films G.I. Joe Rise of Cobra and Purpose and is slated to star in the epic East of Byzantium. Her television work includes roles on Justified, Revenge, Body Of Proof, CSI Miami, 90210, Monk…

She is also a published poet and continues to produce and direct films.