Poet Scott Poole, however, wrote a poem. I know Scott a little bit. We read together last year in Spokane, Washington. I’m a huge fan. He is hilarious. Not this time, though. Here’s the poem he shared on Facebook:

To Run, a prayer for Boston

is to say I will take you
on in the street.
Every breath of mine
is a battering ram,

I am a body of fast moving blood
inhaling you
taking you in like a tank.
I will consume your hate.

I will run straight into you
as if you were a finish line of joy,
picking up the fallen along the way
and you will never stop me,
you will never
stop me.

Soon I was receiving this poem from other friends, friends with no personal connection to Scott. I received it maybe four times this way. Then, somewhere along the line, someone turned the poem into a more-easily-shareable image. I received the image perhaps six times. Then the poem appeared in a literary magazine and on Boston’s NPR station. It’s on many other sites now.

So maybe we actually do get something out of poems, sometimes. All of us. Hope, and comfort, and a feeling of shared humanity, which we always need, but sometimes need very much.

In his poem “Asphodel, That Greeny Flower,” William Carlos Williams wrote “It is difficult / to get the news from poems / yet men die miserably every day / for lack / of what is found there.” Is that really true? Poet Aaron Anstett doubts it. Aaron once told me that he doesn’t think anyone ever died from lack of poetry. We laughed. Upon reflection, though, I’m not so sure.

Aaron also says that poetry isn’t a way to make a living, but it is a way to live your life. Teenagers, and others, please keep writing poems. I’m going to need things to read when I am old. Thank you. 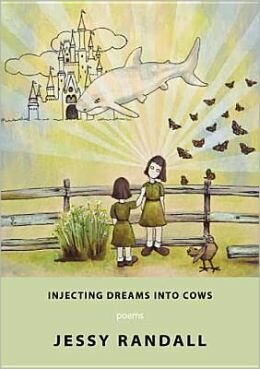 Jessy Randall’s poems, poetry comics, and other things have appeared in Asimov’s, McSweeney’s, Painted Bride Quarterly, and Rattle. They have also been hung from trees, stuffed into birdhouses, and sold in gumball machines. Her latest book is INJECTING DREAMS INTO COWS (Red Hen, 2012); her website is http://personalwebs.coloradocollege.edu/~jrandall/ ; and she blogs about library shenanigans at http://libraryshenanigans.wordpress.com/. Sometimes her friends make devil horns behind her in photographs.

Last reply was 3 weeks ago