REVIEW: 666 SHOULD BECOME THE SEA BY SHANE JESSE CHRISTMASS 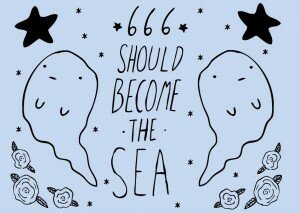 Illustration Cover by Hannah FantanAt first glance this collection reminds me of the way MTC CRONIN accounts for each image, the way one might do so with a list, or taking stock of an item. It’s kind of what I love about CRONIN and what impresses me about Christmass’ poetry. The poetry even utilises space beautifully, echoing precisely the metronome pattern of the sea. At the same time this space is precarious within its typography.

At the beginning of this self-published collection released from Scribd. The site is essentially a huge shared library where you can upload original and innovative works, accessible online or on your smart phone. There’s a keen consistency of rhythm and this undercurrent carries each line as an individual, which is very much what the players of this collection rely on. The narrative can be interpreted on different levels or perhaps an intended gathering of all aspects. The title and the way the poem expresses itself makes me think perhaps a homage to Kerouac’s, The Sea Is My Brother.

Some images that caught my eye which I loved were:

The thing I soon realised is that 666 SHOULD BE THE SEA doesn’t let you up for air, it keeps you under like a careful and practised anesthetist  It doesn’t even give it’s subjects—the crab or the swordfish—pause or mercy. The ocean swallows everything.

666, the enigma of numerical evil represents unknowns. The sea overtakes the highway and Christmass does well in this transition of the sea (the natural) to apocalyptic (the unknown). There’s no sense of panic in this shift, the directions are soft and kind ‘Let the sea in’ almost like a chant. As readers and witnesses we become the sea and the poem proclaims ‘Become the sea, and so become idealess’. Drawing imagery from lines and curves, ‘hooks’, ‘nets’ and put up against an altered nature: ‘symmetrical fish’. The poem tells us to try not to drown, when the odds are against us.

The great thing about this collection is that you can read the first column straight down its margin or you can read across the line. This gives us a two for one kind of bonus and is an exceptional feat in terms of how difficult that kind of thing is to pull.

This poem is mad. It gets mad with the way its been such a glutton: ‘the swell, the hairy-tailed current of the towering / ocean drift’.

I love the way the poem separates. You will know where when you read it. There’s a kind of  outburst of madness, a breaking down and disintegration of things. It’s here, at this shift, that the sea becomes a strong player in the poem. He haunts this poem with his grump, his generic unhappiness and justified disenchantment. ‘The ocean is dead inside & this is a distinction / without any difference.’

The ocean becomes an addict: ‘sewed cuisine of drugs’ and ‘look[ed] into the nightmare of life’. The devil reveals itself, proud of having dismantled everything it had chance to rush towards. This long poem is both abstract and solid and echoes contradiction.  It says what it means but like an ever elusive demon, it undermines us in its cluster of imagery and refrains, its constant questioning. Shit gets real. It gets brave:

There are many oceans
Many dead clitorises
Faeces and foetuses

It’s here that I realise that the sea attaches itself to whatever it wants, whatever you let it. Its multitudes of sadness, ghosts of things, broken things, bare things and 666 is just another number that tells us to be sacred. The sea is also a setting, a character, an abuser of self and others. But ultimately a dark place for those it takes in as survivors, stragglers, experiments. It isn’t a place for delusions, this isn’t a Disney palace for the mermaid princess. Perhaps not intentional but I loved how page 15 was left blank. Everything becomes nothingness. You should read 666 SHOULD BECOME THE SEA if you want you want to be swallowed alive in your own lounge room and awake from the stampede of your own heart beating.